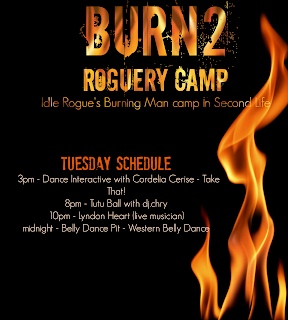 It's Tutu Tuesday, that Burning Man Tradition, and Roguery Camp are bound and determine - though mostly bound - to put a little tulle in your Tuesday.

The day starts with another fun workout, Cordie style, this one is a mystery theme, but not the Sherlock kind. Just show up and do as your told, have we failed you yet?

Then we take a break til 8pm, but tonight's a good night to catch the LampLighters, if you haven't yet, another fiery tradition that adds to the Burn mythology. It starts at 7pm, ask them at the gate to get you there.

At 8pm we open up the sensual big top ballroom for the Tutu Ball, the first of many, we hope. I'll be playing the big epic rock songs that make you gaze at the horizon, while encouraging everyone to wear a very very short and gauzy skirt. You don't have to wear a Tutu, but you have to agree they are very pretty!

Vocalist-Guitarist Lyndon Heart takes over at 10pm. His music is smooth and beautifully made, with well chosen classics and some fine surprises to complete a satisfying experience.

Finally, at midnight, we present a feast of Western Belly Dance. These shows, in the opulent pit arena created by Cyllene Dembo, have been hypnotically beautiful, and this is a wonderful way to wrap up the evening at Roguery Camp.

From my observation the clear winner on Monday was Blaze DeVivre's jaw-dropping Kate Bush dance show, but this comes as no surprise. Blaze has absolutely levelled up in 2015, and she was a great dancer from her first audition. She has the passion of a true artist, and tenaciously brought this production to the stage with two years of loving forethought. A capacity audience responded rapturously, with so many affirmations that productions like this change how people see their Second Life. You can see photos from The Kate Bush Indulgence via the generosity of Doug Kavanagh.

We had a couple of live music performances, Andreus (Anj) Gustafsen came by and let the fingers fly, and TwinGhost Ronas, whose beautiful, beautiful voice is like a caress from a favourite lover also shared the Burn passion.

Last but by no means least, the spectacular traditional Belly Dance Traditional program suffered from a number of technical hitches and still managed to wow the gathered crowd. Big props to dancers Deb Heron, Jenna Dirval, Chewie Quixote, Queenie Acacia, Aubreya Joszpe and Cyllene Dembo (who once again directed with cool, calm and very effective leadership. You can see photos from the Belly Dance show and the Kate Bush show on Facebook, as well as crowd  and party scenes on the Idle Rogue Facebook page.
Posted by chryblnd at 6:20 AM