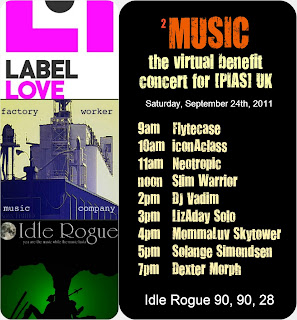 From 9am Saturday, September 24th (SLT), we begin - ²Music: the virtual benefit concert for [PIAS] UK. Twelve hours of mixed media/mixed reality, as musicians from first and second life come together for a festival in support of their peers. Featuring film, interview and performance from cutting-edge entertainers, this is a not-to-be-missed collaboration between two realms.
Majikal link to open Second Life and whisk you off to Idle Rogue

Posted by chryblnd at 6:40 AM No comments:

²Music - the virtual benefit concert for [PIAS] UK. This Saturday, September 24th, from 9am SLT

The inventory of countless independent musicians and record labels was destroyed last month when rioters burned music distributor [PIAS]'s warehouse to the ground. ²Music is a multimedia music event, in association with Label Love, to raise funds for independent musicians and labels affected by the [PIAS] warehouse fire. Come out to see  top inworld and outworld talent in live performances, video screenings, and interactive Q&A sessions!

9am    Flytecase (feat. G.Bevin)
GBevin has been performing solo shows in SL for a couple of months, and today, for the benefit of [PIAS] and Label Love, he brings his band Flytecase into world to perform for the first time. This is a full band, guitars, drums, vocals and keys. Alternative pop-rock songs with intertwining vocal melodies that are elevated by gut-felt music. It radiates energy and emotion, even during the softer parts
10am    iconAclass
MC of renowned experimental "wall of sound" hip-hop crew Dalek, veteran rapper Will Brooks' gritty new solo project IconAclass is already being hailed for an uncompromising lyrical approach similar to classic Public Enemy. Will joins us inworld for the debut of heavy new IconAclass vid, “Long Haul”. Stick around for the post-vid Q&A with the most determined underground artist around!

11am    Neotropic
Acclaimed Ninja Tune alumna and electronic innovator, Neotropic (aka Riz Maslen), premieres four of her experimental films featuring music from her most recent release, Equestrienne Remixes. Join Riz for her first inworld appearance, experience the films, and ask questions during her artist’s talk after the show!

noon    Slim Warrior
A pioneer in her own right, SlimGirlFat aka Slim Warrior was the UK’s first performer to go virtual and she has championed Second Life’s live music scene ever since. The international award-winning recording artist/musician/producer returns to spin an eclectic mix of original dance and house sounds with swirls of trance and techno to move you like you didn’t know you could.
2pm    DJ Vadim
A mainstay of the innovative electronic UK-based label Ninja Tune since the beginning, DJ Vadim has played over 2,500 shows in 60 countries over the last 20 years, and worked with artists from Stevie Wonder to The Roots. The esteemed DJ, producer and Latin Grammy nominee invites you to his house party set to support independent music and to help him celebrate the end of another whirlwind tour!
3pm    LizAday Solo
The incomparable LizAday Solo, with her rock diva vocals and her lush musicality, traipses through genres with an eclectic grace. Liz likes to keep a deeply live element to each performance, but is not ashamed to use technology as a tool to enhance a show. Liz's unique twists on popular covers and her broad range of unusual originals are delivered with polish and warmth.
4pm    MommaLuv Skytower
MommaLuv Skytower is an avante garde electronic songstress who uses her voice as a pen & her music as paper creating globally fused artistic musical compositions that invite you into her mind of (a)VANTRONIK (m)AYHEM - for a brief stay. You need only the human condition and the desire. Get to know her original melodic lyrical beds and find your own way
5pm    Solange Simondsen
Beloved indie/electro DJ Solange Simondsen brings you two hours of the very best in independant music. Erudite and elegant, leave it to Solange to illustrate for you just what it is that is so important about nurturing independant music
7pm    Dexter Morph
Dexter Morph is Second Life’s own musical prophet of the Singularity. Open the door to your mind and let Dex’s cyberpsychedelia expand your online consciousness with funkalicious grooves and his “Riki-tik” technique!
Idle Rogue is proud and delighted to be part of this event. We have been working hard to make the musicians who are logging into Second Life for the first time welcome and comfortable. We have been negotiating with some of the most talented and generous SL live performers. we have been on the biggest learning curve, in order to bring you a cutting edge event that utilises both sound and vision to immerse you in your Second Life experience. Above all, it is our hope to provide a space where those committed to supporting the cause of independant music from around the globe can come together.
Posted by chryblnd at 3:51 AM No comments: 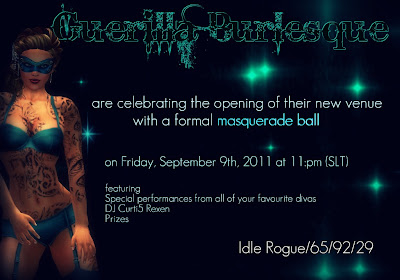 Guerilla Burlesque will be opening a brand new club build on September 9th, and are celebrating with a MASQUERADE BALL. The event will run for two hours, from 11pm, and will feature special acts from all your favourtie divas, as well as prizes and dancing to the tunestyles of Curti5 Rexen.

We would especially like to spend some time with you all, and thank you for the marvellous support you have given us. Guerilla Burlesque is performing to a regular crowd of 40+ avatars every week now, and this is in no small way due to those who have posted about us, shared photographs from the show, and invited their friends to come and see what we do.

The new building was purpose designed to be the showcase venue on Idle Rogue, and as a fitting home for the brilliant and dynamic dance team. Built by ShippyCreations Resident, with the occasional shinkick from me, we hope you will enjoy our fusion of steampunk and industrial elements. The building will be moved into place on the ground at Idle Rogue this week, and you are invited to call by and explore it at your leisure.


Meanwhile ... a masquerade ball! Squeee!
Posted by chryblnd at 7:56 PM No comments: