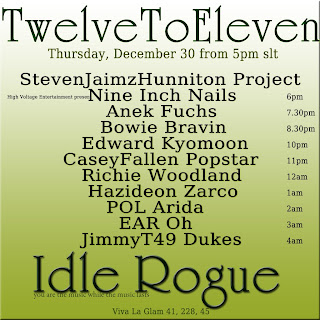 TwelveToEleven - 12 hours of the best rock on the grid, leading us up to New Year in Australia. Last change to the lineup (I hope) is POL Arida, taking the 2am slot. This show will rock \o/
Posted by chryblnd at 2:45 PM No comments: 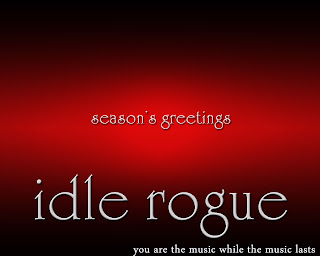 Our best wishes to all of you for the holiday season. Be well, be safe, be loved.
Posted by chryblnd at 5:53 PM No comments: 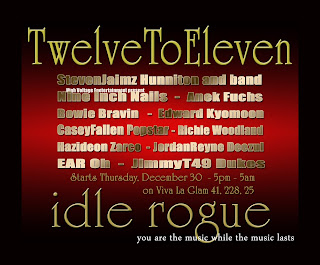 Idle Rogue brings in the New Year on December 30th in SL, one of the few times the clock works in our favour. We have put together an awesome bill, featuring some of the best rock acts currently working the grid.

TwelveToEleven - Twelve hours of rock music to count us into 2011

The plan is to run two stages at opposite ends of the parcel, so that audiences simply have to turn around to get to the next act. This is twelve hours of busy, so if you have hosting experience and want to help out, please let me know.

at 5pm - StevenJaimz Hunniton, guitar maestro, brings his band and opens proceedings like a blister
at 6pm - High Voltage Entertainments' Nine Inch Nails Tribute show is SO good it made me forget my rule about tribute shows.
at 7.30pm - The great Anek Fuchs takes the stage for an hour of guitar worship
at 8.30 - Idle Rogue homeboy Bowie Bravin presents his top quality concert experience, the most original show on the grid
at 10pm - Edward Kyomoon presents slick and polished original rock and covers
at 11pm - CaseyFallen Popstar is new to SL but extremely well-known in the real world. We are honoured to be amongst the first stages he plays as part of his Second Life
at midnight - Original artist Richie Woodland debuts at Idle Rogue
at 1am - Original, articulate and an Idle Rogue favourite, Hazideon Zarco takes his usual position
at 2am - simply the most outstanding female performer on the grid, and possibly the best of either gender, JordanReyne Deezul presents her antipodean steampunk - folk metal? Or grunge sea shanties? Not to be missed!
at 3am - EAR Oh offers up the dark and wistful eye of the storm and
at 4am - Jimmyt49 Dukes puts the hammer to 2010 and rocks us into the New Year
Posted by chryblnd at 12:01 PM No comments: