It's our last show for the Halloween season, and we're staying up late. When you're done with stealing the kids candy, come and see us at the Halloween Theatre on Idle Rogue, for a final waltz with the spooky, darkside divas of Guerilla Burlesque. Doors open at 11:45pm for a midnight start!
http://maps.secondlife.com/secondlife/Idle%20Rogue/204/199/38

Posted by chryblnd at 4:50 PM No comments: 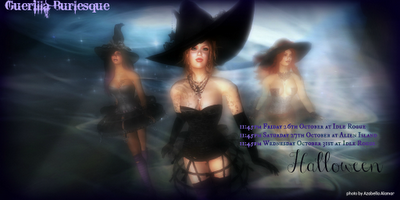 Guerilla Burlesque is traipsing around the grid, tricking and treating on tour. Don't miss our fun and creepy Halloween shows, each one is unique, with acts from all your favourite divas.
Posted by chryblnd at 5:24 AM No comments:

It's Halloween at Idle Rogue!

It is an Idle Rogue tradition for the sim to decorate for Halloween, and each year we put a lot of thought into ways to celebrate Halloween in a way that's not too cheesy. I have always been fascinated by notions of decayed beauty, and the thrill of fear, and Idle Rogue's Halloween displays traditionally use those motifs.

This year's display is our finest yet, a graceful epic of design and texture, created by ShippyCreations, the noob who, in just over one year, has had a significant effect on Idle Rogue's style. I decided to interview Shippy for the blog, and let him share with you some of the influences he feels in his Second Life. 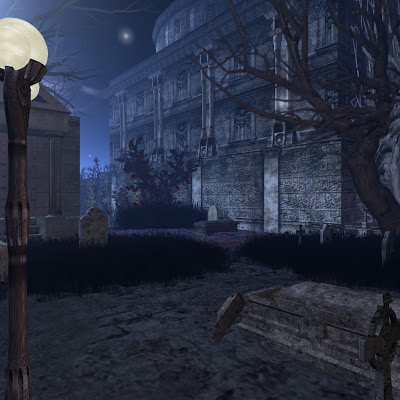 Shippy's RL background is profoundly creative. He describes a close and supportive family of artisans, innovators and teachers who were very willing to nurture his creative urges. " I am a creator by nature," Shippy says. "If there is a way for me to make it, I will try". An architecture graduate, Shippy's college years were enriched by several trips abroad, including to Italy, Egypt, China and Norway, as well as a Theatre Design scholarship. As a self-confessed "power gamer since the age of 5", Shippy incorporated a digital media minor into his studies, and resisted the lure of Second Life while he finished his degree.

"I first learned about Second Life in 2005," Shippy says, "when a fellow architecture student did a project surrounding digital design as well as cloud space.  I had considered joining then, but I stayed away from it until I was finished with school, both for financial reasons and for time considerations, knowing I could spend way to much time there and not get studies done."

When he arrived, his explorations brought him quickly to Idle Rogue. "My first search was for Star Trek, since I'm a huge trekkie.  The sims I found were lacking, and slightly disappointing compared to other games I've played.  Next I went for Star Wars, because I like it as much as I do Star Trek." Shippy acknowledges the space themes: "I am generally geeky that way," he says. His search for others of his kind was disappointing, he says, but notes "I love steampunk almost as much as I love spacepunk, " . His explorations brought him to the Joy Of Steampunk on his second day in SL, which naturally led him across the ditch to Idle Rogue. At Idle Rogue, he found the 3D environment that suits his various interests, "Oh, and they have a rock venue... sweet, and some sort of dance show?". You can almost hear him rubbing his pixel hands together in glee.

Shippy started the Halloween build with plans to equal the build from 2011, which he'd admired, perhaps by incorporating a graveyard and cathedral into a crypt or maze. "After the crypt/maze was largely completed, I went to work on the upper stages.  I had only a vague idea of some sort of basilica design in mind, something with high arches and holes in the ceiling with fallen arches and ruins in the main sanctuary". 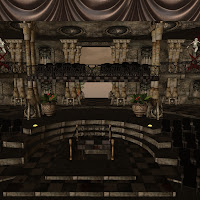 As he incorporated the Guerilla Burlesque stage, however, he found his design leaning to "Paris Opera" house style,". A huge fan of original soundtrack music, he admits his building was influenced by The Phantom Of The Opera and preview trailers from the upcoming film version of Les Miserables. "I love theater design, so it was more fun to build a broken ass theater, something that looked like it was once glorious.  A place for kings and queens and heads of state."

The resulting building is certainly reminiscent of glorious times. High quality textures were chosen, and Shippy feels textures are a vital resource for 3D builders. "A box is a box, until you paint it with something pretty.  Learning how to dial textures is also important.  Your box is still an ugly box if you can't place the paint in the right spots," he says. 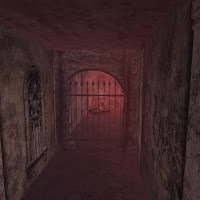 The theatre itself, which will house Guerilla Burlesque's Halloween Show (midnight Wednesday October 31st) features a mezzanine balcony for members of the Guerilla Burlesque Exclusive group, as well as ample seating on the lower level for regular guests. The building opens, almost casually, onto stunning ocean views, evoking a distinctly European feel. The maze, sprawling underneath, is suitably challenging, and filled with enough spooky surprises to make it fun. Don't forget the graveyard, and pumpkin patch, complete with interactive poses and a dance machine for your ghoulish parties.

As for power-levelling content creator Shippy Creations, his plans for future builds remain squarely in the Epic column. "My favorite (project) so far is an "Air Basillica" done in the steampunk style.  Think Flying Fortress from "Sonic the Hedgehog 2" for those of you gamers, " he says.

The Halloween Theatre opened on October 1st and will be gone before dawn on November 1st (as long as chry can bear to part with it). We're very keen to publish any photos you take that use the building, they can be mailed to idlerogue@gmail.com.