Auditions announced for "Cirque" in 2015 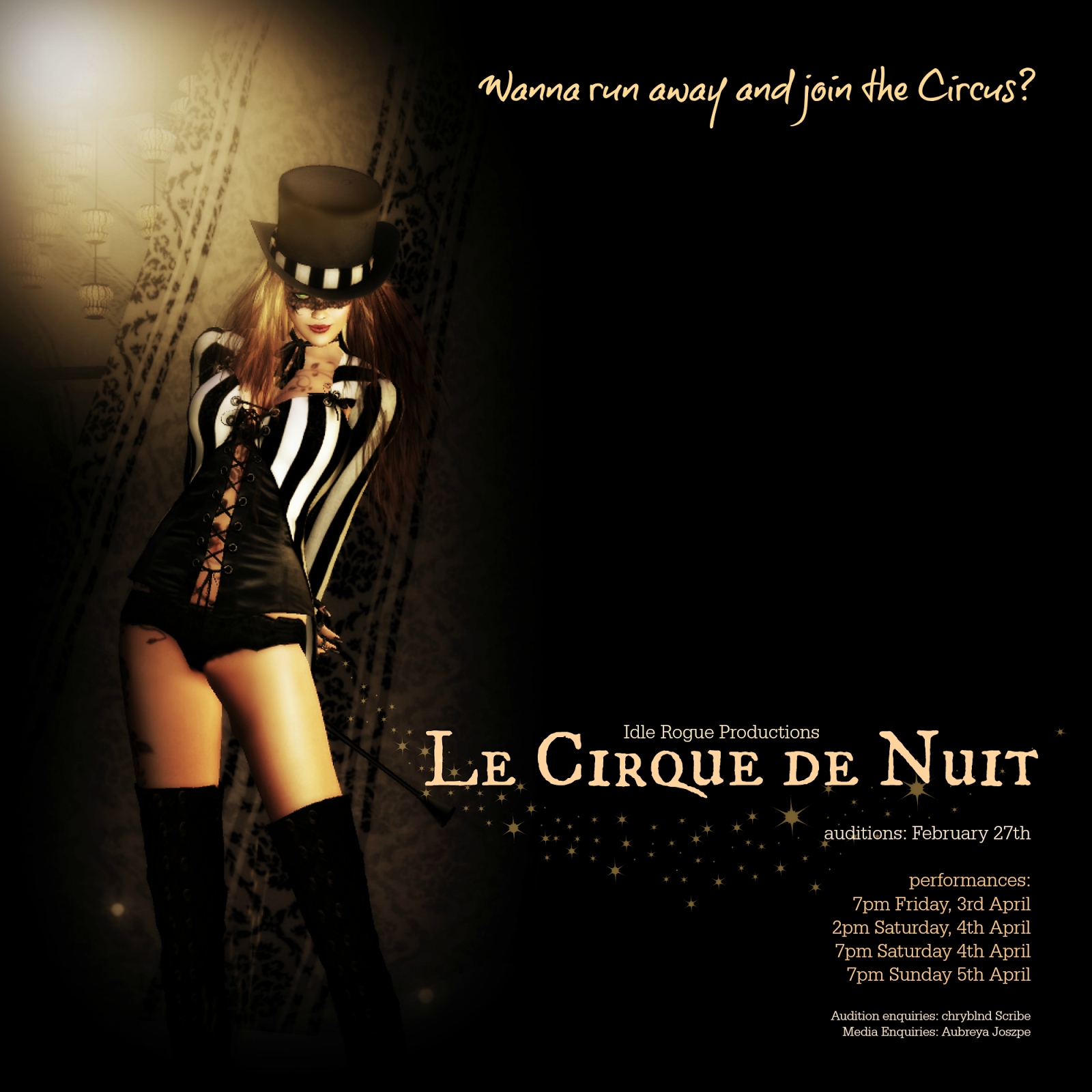 Idle Rogue Productions are performing the very successful Le Cirque de Nuit this Easter, with performances at 7pm on April 3rd, 4th and 5th and a matinee performance at 2pm on April 4th.

These will be the only performances of Le Cirque de Nuit in 2015, however it is envisaged that the production will be scheduled each year as long as it remains fresh and successful.

We are seeking new acts to add to our roster of performers for the 2015 season, and will be holding auditions during the last week of February. Please read the following information about preparing your audition for Le Cirque de Nuit.

Idle Rogue Productions uses scripted camera technology by Arrehn Oberlander, and successful auditions will need to allow additional time for your cinematography to be completed; these sessions generally take a couple of hours.

Please note that not all acts will appear in all shows.

Act Requirements:
You are required to create an original dance-based act to be performed in real time at performances as outlined above.
Your act must be magical, circus or exotic dance based, with a steampunk theme. We will be looking for a variety of acts, particularly circus acts such as acrobatics, tightrope, trained animals and similar. Illusionists, acrobats, clowns and tarot performers who can stay in character should consider applying.
Your costume and set must be in monochromatic tones - black, grey cream and white, no other colours are permitted, except for skin and hair.
Your set must employ the Metaharper Show Tools as supplied by Idle Rogue Productions, so you must ensure that each component, all prims, scripts and textures have modify and copy permissions.

Your act must be able to stand alone among those previously presented. We strongly suggest you pay attention to the following:

Background:
Le Cirque de Nuit is a loose homage to Erin Morgenstern's book, The Night Circus. It is not necessary to have read the book to take part in the show, as we will not be recreating the story. The novel is set in the Victorian era, and we have substituted “steampunk” for “Victorian”.
For practical purposes, consider steampunk to be applying an olde-worlde style to modern concepts, as opposed to Victoriana being old stuff that looks old J.
As an example, if you can take the ingenuity of Le Cirque de Soleil and make it look steampunk, THAT is the act we want.

For those seeking a better definition of steampunk, please see this link, and be aware that the subject is covered extensively on the internet:
http://people.howstuffworks.com/steampunk.htm

Music Resources:
Your act should be set to “steampunk” music. We know this is not an easy genre to define and especially to source material. Some genres you might find helpful are punk cabaret, glitch hop, electroswing, trip-hop and folk-noir.
Playlist – steampunk - please note these tracks are NOT your suggested music, they are a point at which to start searching, for those who are not familiar with the previous production or the genre
http://www.youtube.com/playlist?list=PLgv_Su4XQdaHqsPrzKiJBvV2JU7v4pc9I
and the playlist of music already used in the production is here:
http://www.youtube.com/playlist?list=PLgv_Su4XQdaGHrxzkb46SBrodLMLvYVGN
You may not use a song that is already in the production, and you should avoid using the same artists as have been previously used.

Visual Resources:
collected machinima of the production in 2014 can be viewed here:
http://www.youtube.com/playlist?list=PLgv_Su4XQdaFED8yzyUQb9UKmBR9LkLB0

Learn more about The Night Circus on Tumblr and on Pinterest.


Production Requirements:
Payment: you will be paid a share of all tips collected during your performance. Idle Rogue Productions divides every tip between cast and crew. Tips paid privately to you are yours to keep
Publicity: You are asked to make yourself available for publicity opportunities that may arise during pre-production, production and performance. This can include photo shoots, media events, social media sharing, interviews in addition to interactions with the audience, prior to, during and after the show.
Essential: Sets must be completely mod/copy permissions and you must be willing to learn how to use the Metaharper Show Tools to prepare your act for performance
You must be willing to join inworld groups “Idle Rogue” and “Production Team – Idle Rogue”
Ability to accept constructive criticism and to workshop improvements
Be scrupulous about honouring your commitments
Desirable: Facebook profile to join “Le Cirque de Nuit Production Crew”
Google email address and access to google calendar

Nominating for an audition:
Please create a notecard and name it -
Cirque 2015 Auditions [your avatar name]
Inside the card please nominate two times from the following list to audition:
Friday 27th February:

Please also include the name of the song you will perform in the notecard. Additionally, please email the music you will require for your audition to idlerogue@gmail.com . Both your nomination for audition and your music should arrive by 2pm on February 25th, and your audition time will be confirmed by 2pm on February 26th.
Auditions will be held in front of a panel from the show’s production team. You should not expect feedback from members of the audition panel, and will be advised affirmative or negative by March 2nd.


IDLE ROGUE PRODUCTIONS
presents
MAYFAIR - The Stories of the Mayfair Witches
based on characters from the novel "The Witching Hour", by Anne Rice

Brought to you by the team behind "Guerilla Burlesque" and "Le Cirque de Nuit", "Mayfair" tells the stories of a dynasty of powerful witches ...  and the demon who caters to their every whim.

The setting is a garden party at the old Mayfair mansion on First Avenue in the Garden District of New Orleans. The notorious are-they-or-aren't-they family has always drawn it's fair share of speculation, with wild tales of a purse full of coins that never runs out, and a mysterious man whom only some can see.

But the Mayfair witches have endured shattering tragedies along with their immense power. What does the comely Lasher want from them? And is any witch strong enough to control him?

Join us in the gardens of the Mayfair mansion. It's the most beautiful hour of the evening, and the soft deep sky is dimming to twilight. Surrounded by friends old and new, the legends unfold before your eyes ...

Reserved Seating
To maximise sim performance, seating for this event will be strictly limited to 40 audience members, with a total of 240 unique seats across 6 performances.
Seating can be reserved by members of the inworld group "Guerilla Burlesque Exclusive". Strict conditions will apply, please contact Franney for further details.

Membership to Guerilla Burlesque Exclusive costs $1000L. Reservations are not required to see this show, however reserved seats will be seated prior to opening to the public.

Performance enhancement:
Dance entertainment uses a large portion of a sim's resources, and Idle Rogue Productions strive to give you the best entertainment experience. We want you to enjoy your visit with us, and will not harass you to modify your avatar or observe script limits to stay on the sim. However there are several things you can personally do to gain more enjoyment from the show, and to assist our performance
Your host Franney can help you with these ideas when you book. Please ask for an appointment to choose seating and go over best practice if this would be useful you.

Edited to add: We wish to advise that scenes in our current production - "Mayfair" - contain adult concepts and occasional nudity.
No judgment here if that makes you uncomfortable. If you've booked a seat and feel this would affect your enjoyment of the show, please contact myself or Franney Resident and we will cancel your reservation without hesitation.
If you haven't booked a seat, whyever not? We have nudity!

Posted by chryblnd at 9:37 PM No comments: