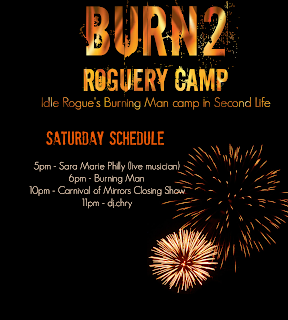 Saturday Schedule
We are coming to the close of our Burn 2 schedule. Today's events are:

It's been such a delight to play for the week at Burn 2, seeing old friends, meeting new ones. So many good times and memories.
Tonight we will be attending the Burning of the Man ceremony at 6pm. This is a truly engaging event, and we would be honoured if you would join us attending it.
Come as you are, or come as the wonderful Carnival of Rogues that we know resides at the heart of this community. Please no weapons, but find your inner dark and sexy Carney, and join us at the super-laggy, crazy beautiful Man Burn 2015.

Friday's winner event has to be the Pasties and Panties Art Tour, but it was a close call, every event was just a blast.

Kyra led us out of the gate with her Rock Show, and interactive that featured great metal and rock songs. She's like Cordie's twin, same sunny nature and welcoming charm. And speaking of Cordie, the Monster Mash Interactive was so cool, and heavily attended, because of course everyone loves to dress up as a monster and dance to Thriller. Even I did it, and I hate Thriller!

And then it was time for the Great Pastie Caper. I believe we rode bikes. I believe we looked at art installations. I definitely saw pasties. The rest was a kind of benign chaos, but it was the single most glorious event of the year for me.

This was a late inspiration from Thea Dee, who, it must be said, serves as unofficial Community Officer for Idle Rogue, and certainly is the nexus for Idle Rogue at Burn 2. It was just a great fun event, that could only have been put together by someone who cared not only about Roguery, not only about Burn 2, but about art. And pasties. Thank you Thea.And thank you Jess Cauld, your bike gift saved me from a trip into the mountains, never to be seen again.

Something happens at Burn. You're not who you usually are. You let go of things that you usually use to repress yourself. And nobody behaves especially badly, but it's very cool to watch people have fun, and let a side of themselves loose. I see a bunch of photos of me in pasties. That's ... not usual. And yet I didn;t want to get dressed when it was clearly time to cover back up!

In our pasties and panties, and with more than one willing naturist joining us along the way, we arrived at the DMV in time for the LampLighters Parade, and were generously invited to join, which was wonderful. The LampLighters have taken on a spiritual assignment for their Burn, and it's quite moving to watch them make their way across the site.

After LampLighters we had a really unique and exciting live music session. JavaJoe MacIntyre was in exceptional form, his beautiful voice not so much a vocal fry as a vocal razing. Joe was on his A Game, and if you have ever heard him like that you know what a treat it was.

Komuso Tukogawa followed, and was also in his best form. I feel genuinely honoured by these two innovative musicians and the quality of performance they delivered. There was nothing same ol' about either of these guys, and well played blues music is always a gift to the heart. I am so grateful to those who made this performance possible.

Burnlesque suffered from several technical problems, but once again it was directed with grace and good humour, through to a duet ending from Ty and Meegan Danitz that worked as an authentic "show" workup of a burlesque-oriented tune - It Ain't The Meat, It's The Motion, by Maria Muldaur. With a stylised balcony stage set, and Rosie The Riveter meets Dita costuming, this was a fun act that felt like a dance act, in the very best context.

The last show of the evening was a reprise of Blaze DeVivre's highly praised The Kate Bush Indulgence, which I talked about on Tuesday. I'd like to extend my personal thanks to Blaze for repeating her performance, because I had been unable to see it in it;s complete form at the previous session. It was kind of her and her team to take the time to run it again for me, and I hope for some of you who had heard how beautifully crafted it was. I know Blaze feels it is still a work in progress, so you can look forward to another opportunity to see this production at Idle Rogue.