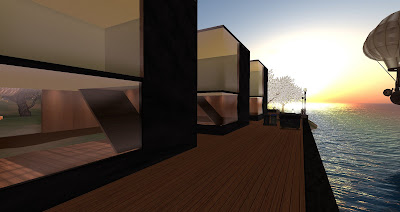 Long-term Rogues will remember we have run this program successfully in the past. This incarnation is largely under the care of Cait (Knowledge Tomorrow) and myself, at least until we find someone who can commit the time to it.

Idle Rogue houses new residents (up to four at a time). We provide free furnished accommodation for a maximum of five weeks, during which time new residents (less than thirty days old) are encouraged to learn basic skills and meet and interact with more experienced users. The simple apartments are designed to reinforce acquired skills and interaction. The events and continual traffic on the sim provides a great opportunity to meet and mingle.

New users are also offered opportunities to advance in an area of interest, including content creation and employment opportunities. There is already a builder platform, and classes/workshops in many skills will commence over the next few weeks.

The idea for the program grew out of my own SL experience. As a noob, I rezzed in the former Pond Estates, a now defunct sim which was operated by an Australian ISP. For all it's flaws (and there were some), The Pond gave many Rogues space and opportunity to grow and establish ties to Second Life.

Anyone who reads or watches mainstream media will be familiar with stories of Second Life being "dead" because it is empty. While we all know that is not true, many new users simply do no know where to find other people, and leave, thinking they've stumbled into a relic. It was my intention to address this simply by actively looking for new users and engaging them in conversation. Where some mutual interests exist, the noob is invited to take up a "lease". After five weeks, assistance with renting, buying, or relocating is offered, and the new resident is "released into the wild".

The program, though expensive in terms of prim resources,time and emotional energy, has been so very worth it. We are looking forward to our new tenants, and Cait has already filled three of the four apartments. If you meet a new resident and think they would take to the Rogue lifestyle, please IM Knowledge Tomorrow or chryblnd Scribe to see what we have available.
Posted by chryblnd at 9:30 PM